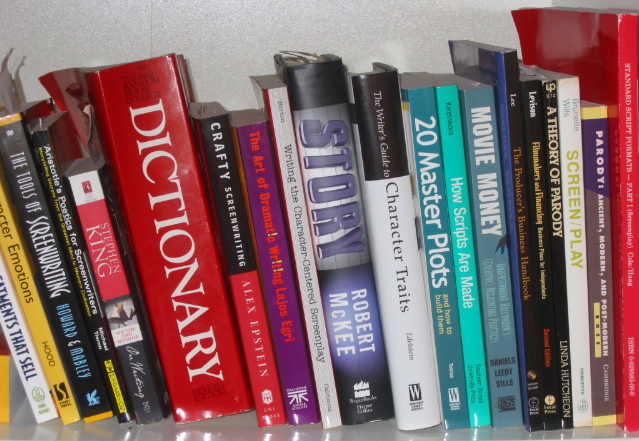 Here’s what I think of these books:

Top Five On The Shelf:

Standard Script Formats – Part I (Cole/Haag) – A terrific book. Having a strong command of formatting makes the rest of the process much more productive. It’s freeing to really understand your options. I’ve worked hard to develop a narrative voice and formatting is as much a part of it as anything else.

The Tools of Screenwriting (Howard & Mabley) – Maybe its just because this one is newer than some of the others, but I find it a great refresher of the basics. I can spend hours with this book. Unlike some of the more popular “how-to” books, this is really a summary of many of the concepts taught in writing programs. Not “tips”, but real writing techniques. The book’s main shortcoming is that it spends too little time on each technique.

The Art Of Dramatic Writing (Lajos Egri) – A standard on every writer’s shelf. If you don’t already own it, you’re probably just screwing around.

Crafty Screenwriting (Alex Epstein) – Despite the cheesy title and cover, this book is a great reality check. Alex is a working writer, has an interesting screenwriting blog, and gets to the bottom line on a great many writing issues. But reader beware. He makes it sound easy. We all know it is not.

(Couldn’t find another book from this shelf that deserves the top five status, so there are only four books in my top five.)

Writing The Character Centered Screenplay (Andrew Horton) – I love Horton’s sense of wanting complex, rich characters and his very intelligent discussion of how to create them. However, at the end of the day, this book didn’t really help me get where I want to be. I prefer a more story-centered approach and don’t find that characters or complexity suffer because of it. I think working from the characters out is a difficult way to go.

On Writing (Stephen King) – I’m not a big Stephen King fan, but he’s a very accomplished writer and, when you read this, you’ll see he faces the same issues we all face. His complete rejection of theme is disheartening (and the main reason I’m not very attracted to most of his writing), but his discussion of writing techniques is excellent and his account of being run down by a van, his near fatal injuries and his recovery is extremely entertaining.

Aristotle’s Poetics For Screenwriters (Michael Tierno) – The original Poetics is available online all over the place for free and its under fifty pages. However, it takes a lifetime to fully understand it. Poetics is an important work to understand inasmuch as it forms the basis for Hollywood’s ideas of proper screenwriting. Tierno cans it down to essentially the “Poetics For Dummies” level. Better than no Poetics at all, I suppose. I think there’s a competing screenwriter oriented analysis of the Poetics in the stores now. I haven’t read it and don’t know if it’s any better.

Story (Robert McKee) – McKee starts out saying all the right things about hard work, true imagination, developing creativity, and everything a writer wants to think about what she is doing. Unfortunately, after a great opening, McKee spends the rest of the book reducing screenwriting to series of intricate formulas (with nifty graphs and charts), all the while insisting he’s not reducing anything to anything. It doesn’t work that way, folks. Even if your completed script can be analyzed using these charts or graphs, even if it fits perfectly, that wasn’t how you got there.

The others books fall into three categories: (i) crap, (ii) on the wrong shelf, such as the producing books, or (iii) scholarly works on screenwriting I enjoy but aren’t really designed to assist writers. If you want to know about any of them, just ask.

On looking over this post later, when I’m awake, I have to acknowledge that a lot of people get a lot of value out of some of the books I called “crap” and “overblown.” As with all things, if the book works for you, use it. In fact, use whatever works, always.

11 thoughts on “A WRITER’S BOOKSHELF”